Dutch ornamental tiles were created in the 17th Century. I believe this tile was made possibly as late as the 18th C. The first use of wall tiles was probably in areas where dampness and dirt were worse and the earliest wall tiles were used mainly as baseboards, then other wall areas also began to be tiled… within the hearth and alongside it, on corridor walls and other places where one was likely to brush against whitewash.

Condition is nearly perfect. The blue and white tile has an interesting mark with a crown on the back and no doubt the artist’s mark.It has Ox-head corner motifs. 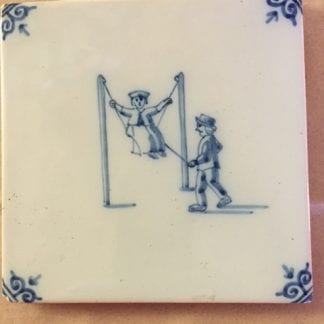