The following valuable info copied from “Rockdoc a.k.a. Richard Forrest”

In 1965 Andy Warhol became The Velvet Underground‘s manager and he booked them into New York’s Scepter Studios in April 1966 to record the group’s first album which was de facto produced by studio owner Norman Dolph rather than by Warhol. Warhol insisted that chanteuse Nico (real name Christa Päffgen) sing on the album and she sang on three songs. For unknown reasons some songs were rerecorded and some new songs recorded by producer Tom Wilson in Los Angeles later that year. Wilson was a staff producer for Columbia (and later Verve) Records and had produced three of Bob Dylan‘s early albums (“Another Side of Bob Dylan“, “The Times They Are A’Changin’“, four tracks on “The Freewheelin’ Bob Dylan“, “Bringing It All Back Home“) including the hit single “Like a Rolling Stone“. Warhol offered the album to Columbia Records, who turned it down! Then through the Andy Warhol association Verve Records agreed to release it. Logically enough, as Nico was not a member of the group the album’s title was “The Velvet Underground & Nico. The “&” emphasizing the fact.

Warhol gave his Banana painting to the band for the album cover. The removable banana on the front was difficult to produce and delayed the album’s release until March 1967. Acy R. Lehman, who designed the cover, decided on the gatefold to be able to include photos of the band members taken by Paul Morrissey, and color photos by Verve photographer Hugo. I have seen the large band photo on the rear cover credited to Andy Warhol, so I am not sure it was by him or, as stated in the album credits, by Hugo.

The rear cover photograph showed actor Eric Emerson the lights projected behind the band with his inverted face superimposed on the picture of Lou Reed‘s head. This is commonly called the “Torso” version”. Emerson was in need of money as he had been charged with drug offenses and sued Verve Records to pay him for the use of his photograph. Verve refused to pay and recalled as many copies as it could and stuck a large black sticker over the offending photograph. On subsequent printings of the album sleeve the photograph was airbrushed to obscure Emerson’s portrait before the album could be reissued in June 1967. This delay badly affected the album’s sales; only about 30,000 copies being sold between 1967 and 1972 – I must be one of the early buyers as I bought my copy in late 1967 on the strength of the review in Rolling Stone. Brian Eno is quoted as saying in 1982 “everyone who bought one of those 30,000 copies started a band.” – obviously, with one exception – me!

There were promo copies distributed with the “Torso” cover which had white or yellow record labels. I think all promos were mono versions with “Torso” rear cover. There are three versions of the cover of the original American release: a first state with the “torso” rear cover, a second state with the sticker over the upper part of the torso picture and the third state with Emerson airbrushed out.

From the NY Times 4/26/09.  “Warhol’s rock covers, especially for the Velvet Underground and the Stones, stand out for their bold strokes and sexuality. But all of his album covers mirrored his other forms of art, which reflected and helped visualize the broad popular culture of his times: from the innocent frenzy of the late ’40s and the muted cool of the 50s to the over-saturated exuberance of the ’60s-the age not just of sex, drugs and rock ‘n’ roll but also stereo, moon shots and color TV- and beyond.”

Cover is in near mint condition. Just the banana tip was peeled but remains in place. There is a tiny dent in one corner (as shown) which is visible front and back (and the same dent appears on any image I’ve seen in other offerings possibly due to shipping), plus a light little ink scribble on the back cover measuring less than 1/2″.  The record is in mint condition and appears as though never played.  V/5008, V/V6-5008 is on the cover and on the record itself  where it is additionally hand etched on the vinyl around the label: “Side 1 MG 558, Side 2 MG 559.”  (Hard to see). Year released, 1967. 33 RPM, 12″ LP, mono.  Produced by Andy Warhol, all arrangements by the Velvet Underground. This is an historical artifact.  On the back there is the large black applied sticker which adds to it’s value.  The spine is strong and clean.  The album  was purchased at the time of distribution and kept in a protective sleeve. They stopped using the sticker once they had re-printed the back cover with the “torso” image air-brushed of Eric Emerson. This valuable sticker is in perfect condition.

Please see extended description.  Everything I know about this album I had to learn from the Internet 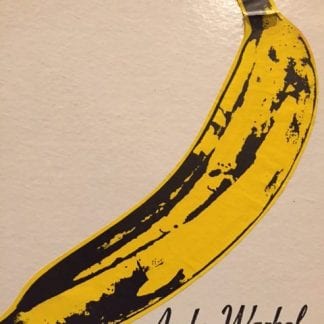