This is an original bronze of Nymphe De Diane  by  Eugene-Antoine Aizelin. It has a rich overall  untouched patina.

The bronze weighs 60 pounds thus a personal exchange is suggested and will be discussed. Professional packing and shipping is at the expense of the buyer.

Eugene Aizelin is the son of Claude-Jacques Aizelin, designer . He entered the Ecole des Beaux-Arts in 1844 where he was a pupil of the sculptor Jules Ramey and Auguste Dumont . He participated in the rooms of 1852 to 1897 and the Universal Expositions of 1878 , 1889 and 1900 . He won several awards: third medal at the Salon of 1859 , a second medal in 1861 , a third medal at the Universal Exhibition of 1878. The group representing Mignon is exposed for the first time in plaster at the Salon of 1880 , and in marble the following year and finally bronze at the 1889 World Fair in which he was awarded a gold medal. Meanwhile, he received orders for Parisian monuments: the Théâtre du Châtelet , the Opéra Garnier , the City of Paris , the Louvre Palace and the churches of the Trinity and St. Roch . His works are published by the founder bronze Barbedienne in several dimensions.

The Wolf and the Lamb County Museum of Oise in Beauvais, Salon 1892 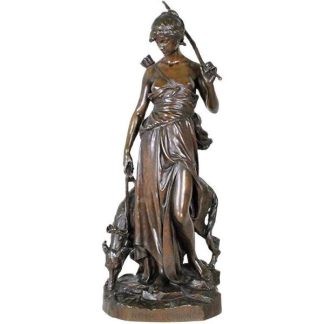