This is for four 12 1/2″ x 19″ gouache on paper street scenes and all are fragile. There is some edge damage, particularly on the one that is featured. Matting would hide this. Buyer pays for shipping.

From FRENCH Wikipedia as copied:

“First entry in the Graduate School Sophie Germain; continued in 1928 at the School of Fine Arts in Paris in the workshop Lucien Simon , she worked several years alongside Rhoner, Humblot, Jacques Despierre , Lucien Fontanarosa , etc.

She prepares jointly art teacher diploma from the city of Paris and the State it passes successfully. She teaches in Paris Aurillac as well as the Normal School in this city. In 1945, she left teaching to devote herself to her career as a painter and illustrator.

The human face of particular interest, she made ​​many portraits of personalities including arts and letters Paul Guth , Suzanne Flon , Yvette Alde , Madeleine Robinson , etc.

Much of her work is devoted to compositions in which the female nude has an important place. She was asked to illustrate many books and has composed two windows for churches in Britain. 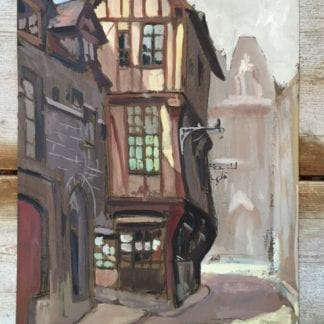