As noted in the DAC Catalog:

Netter Worthington created these four interesting subjects, representative of the early 15th Century in Northern Italy. The costumes of one pair represent those worn by the aristocracy of the period. The others are of the standard costume of the popular theatre, the Commedia dell’ Arte.

While these are the originals, it is interesting to note that DAC printed them on Kromekote with spot varnish giving them the effect of real stained glass.

3 are framed and mounted on Masonite. They are ready to hang. They measure 14″ x 18″ and 13″ x 19″. One is detached from the Masonite.  Otherwise the condition is fine. They are being sold as a grouping.

Born in Salt Lake City (year unknown), Worthington earned art degrees from the University of Michigan and Cal State Long Beach. He served in the Army during World War II and studied painting in France and Mexico City.

In 1958, he joined the faculty of Chapman College in Orange. Seven years later, he launched Chapman’s innovative World Campus Afloat, offering courses aboard a ship that took budding artists to 16 ports in Europe, the Middle East and Asia.

In 1969, Worthington moved to San Diego to become director of logistics for the overseas programs of United States International University, now known as Alliant International University. He was named dean of the school’s performing and visual arts section in 1975, and later directed the university’s London and Mexico City campuses before retiring in 1990. Worthington passed away in 2002. 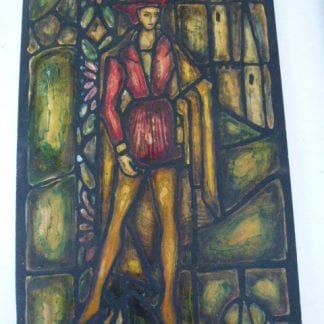