The period from the turn of the 19th century to the end of World War I (1914–1918) was a period of unparalleled prosperity, innovation and expansion for the Langley Mill Pottery, with the proprietors becoming increasingly affluent and influential. In 1913, following Albert Lovatt’s death, the pottery was converted into a private limited company, Lovatt & Lovatt Ltd. with John Lovatt and Bert Lovatt (Albert’s second son) as joint Chairman and Managing Director. Reginald, (Albert’s third son) also joined the management of the company around this time. Unfortunately, after 1918, the post-war depression began to seriously affect the profitability of the pottery, a situation not helped by a period of apparently weak management.

By 1923, the profitability of the pottery had declined significantly further, with the Directors being forced to take large cuts in their salaries. Finally, following the death of John Lovatt the previous year, the company went into voluntary liquidation on 18 July 1930. This ended the involvement of the Lovatt family in the affairs of the Langley Mill Pottery, although the Lovatt name did continue to be used by successive owners of the business.

The condition is overall excellent. There is some glaze variation but nothing missing. This photo has a reflection from the sun. No chips. Stamped: Lovatt & Lovatt, Notts, Langley Mill.   Buyer pays for shipping. 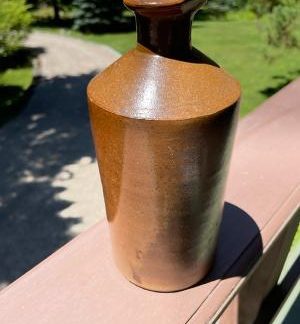