Artist, Alton Tobey, from Larchmont, NY, lived from 1914-2005. His murals grace the halls of the Smithsonian Institution in Washington DC; The MacArthur Memorial in Norfolk, VA., The Intrepid Sea Air Space Museum in NY and dozens of other public buildings throughout the world. Tobey was a distinguished historian and art educator. His dedication to research, science and history spawned a career as an illustrator for LIFE magazine, 350 paintings for The Golden Books History of the United States, and for paintings in dozens of other books and periodicals.

As a Modernist painter, he was a founder of the Curvilinear school of painting based upon the theories of Albert Einstein. He had dozens of one-man exhibitions of his Curvilinears, his Fragments paintings, and his dimensional conceptual works in museums and galleries both locally and internationally.

In March of 2007, two of Alton S. Tobey’s original paintings for The Golden Books History of the United States, painted in 1963, were accepted into the collection of the National Museum of American Illustration in Newport Rhode Island. The two paintings were “Teddy Roosevelt and the Rough Riders” and “The Inauguration of President Johnson.” 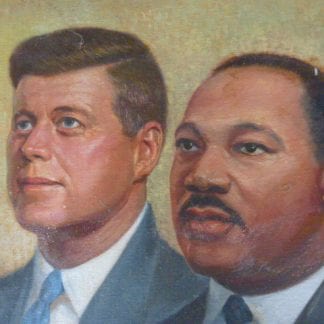