All this info was found on the Internet!  I wish everything I researched was this easy.  Buyer pays for shipping. Please note that we have two of these lithos.  Only one is stamped “Proof” and the other has a fold in it which is NOT visible on the printed portion, only on the margin and when turned over.  It is perfectly fine for framing.  The price is for the “Proof” signed page.  We will discuss the other with you if you have an interest.

A BEAUTIFUL, ARTHUR SZYK, TITLE PAGE PROOF FOR THE REPUBLIC OF CHINA, 1ST EDITION, 1948, LITHOGRAPH, IN EXCELLENT CONDITION.  THIS LITHOGRAPH WAS PUBLISHED BY K. BILESKI, STATION B, WINNIPEG, CANADA.  LITHOGRAPHED IN THE U.S.A. BY HERMAN JAFFE, PRINTER, NEW YORK, U.S.A., COPYRIGHT 1948.  THE TOTAL MEASUREMENTS OF  THIS LITHOGRAPH IS  10″ LONG BY 11.5″ TALL.  THE INSIDE MEASUREMENTS IS 6.5″ LONG BY 8″ TALL.  THE BOTTOM IS SIGNED, ” ARTHUR SZYK, NEW CANAAN, 47.    ON THE BACK IS STAMPED “PROOF” AND DONALD ART CO, INC. NY.” ARTHUR SZYK WAS A MASTER OF PAINTING AND CALLIGRAPHY.  HE WAS A POLISH BORN AMERICAN ARTIST FAMOUS FOR HIS ANTI-AXIS POLITICAL ILLUSTRATIONS, CARICATURES, AND CARTOONS DURING WORLD WAR II.  HE DEDICATED HIS WORK TO DEMOCRACY AND FREEDOM.  BEN ZION BOKSER SAID, ” ARTHUR SZYK WAS A GREAT ARTIST, ENDOWED BY GOD WITH A RARE SENSITIVITY TO BEAUTY AND WITH A RARE SKILL IN GIVING IT GRAPHIC REPRESENTATION”.

The multi-colored lithograph represents Arthur Szyk’s conception of the entire history of the Republic of China. In the center,”Republic of China” is displayed in traditional Chinese characters superimposed over the yellow circular Chinese symbol for”long life” and surrounded by four circular blue-and-white star logos of the Nationalist government founded by Sun Yat-sen. The dragon at the center top represents Imperial China and is flanked by portraits of Sun Yat-sen on the right and Confucius on the left. The eight immortals of Taoism line either side of the central panel, and depictions of a scholar-bureaucrat and peasant farmer as well as a porcelain urn and the circular symbol for the Republic of China decorate the lower half of the print. Four vertical and four horizontal columns containing the names of China’s provinces spelled in Chinese characters line the bottom edge.

“‘Art is not my aim, it is my means.’ Arthur Szyk’s art was not an end in itself. It was his means to promote tolerance, human dignity and freedom.” Szyk fled Nazi-controlled Europe for the United States in 1940. His widely published caricatures made him one of America’s most famous political satirists during World War II. He was a gifted artist, considered one of the greatest modern practitioners of the art of illumination, especially in miniature format. Arthur Szyk was born in 1894 to Jewish parents in Lodz, Poland. He had his first public art exhibit at age fifteen and then went to Paris for formal training in art at the Academie Julian. He visited Palestine in 1914 with a group of Polish-Jewish artists and studied Muslim art. Upon his return, he enlisted in the Russian Army and served about six months. He married Julia Liekerman in 1916; they had 2 children, George, born in 1917 and Alexandra, in 1922. Between 1919 and 1920, during Poland’s war against the Soviet Bolsheviks, he served as artistic director of the Department of Propaganda for the Polish army regiment quartered in Lodz. In 1921, he moved with his family to Paris where he lived and worked for ten years. He became well known for his magnificent illuminations and book illustrations, in a style reminiscent of Persian miniatures. He illustrated several books in France, began a series of miniatures on the American revolution, and neared completion on an illustrated Haggadah. The great themes of his most admired work, democracy and Judaism, were already well established, earning him both fame and significant commissions. In 1934, Szyk traveled to the United States for exhibitions of his work and to receive the George Washington Bicentennial Medal, awarded by the U.S. Congress. In 1939, following Germany’s invasion of Poland, he focused on producing anti-Nazi editorial cartoons published in many Western newspapers and magazines. In late 1940, after a period of residence in England, he emigrated to the United States with his family. He would be one of America’s leading anti-Fascist political caricaturists as well as a leading advocate for Jewish rescue. His experience of the Holocaust was personal: in 1943, his 70 year old mother and her Polish companion were deported from the Lodz ghetto and murdered in Maidanek concentration camp. In addition to his widely published satiric art, Szyk devoted a great deal of time and energy to the Emergency Committee to Save the Jewish People of Europe, and to promoting the establishment of an independent Jewish state in Palestine. Szyk received his US citizenship in 1948. In 1951, he was under investigation by the United States House Un-American Activities Committee as a suspected Communist. His son, speaking on his behalf, declared his non-affiliation with any Communist organization. That same year, Szyk died at 57 of a heart attack.
Credit Line:United States Holocaust Memorial Museum Collection, Gift of Irvin Ungar 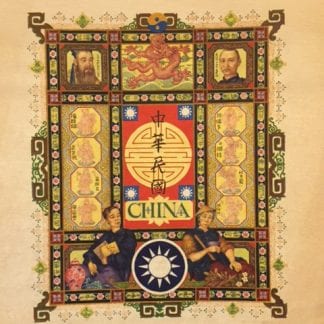