Barry Leighton-Jones was born in London, England in 1932 and is a direct descendant of the Victorian artist and President of the Royal Academy, Lord Frederic Leighton. He began his artistic career at the age of five by winning a major art competition, and later completed seven years of academic training at Sidcup and Brighton and was tutored by the acclaimed English artist and illustrator from the Royal College of Art – John Minton.

After launching himself straight into the British art world, his paintings were very quickly in demand – many of them were published and his international reputation grew. But the real breakthrough came in 1985, when he was selected by the Kelly Estate to create a series of images based on the life and work of the famous American clown – Emmett Kelly.

Taking a page out of Norman Rockwell’s book, Leighton-Jones devoted a great amount of time to the preparation stage more than ever before. The Kelly Estate supplied Leighton-Jones with black and white photographs of Kelly throughout his career, and he took it upon himself to carefully study Kelly’s work on film and read everything about the great man. He even completed visits to the Ringling Museum in Sarasota. All this preparation paid off, as the result is the comprehensive series of paintings, which join the different periods of Kelly’s life. Many of the paintings and sketches were produced as limited edition prints and figurines, all becoming best sellers and eagerly sought after by collectors all over the U.S.A.

The years between 1986 and 1992 define one of the most important and prolific periods in the career of Barry Leighton-Jones. Those years mark his selection by various licensors to produce paintings with the purpose of reproduction in several forms: prints, collectors plates, figurines, etc. Although the foremost of these commissions were “The Emmett Kelly Collection”, he also completed “The Gone With the Wind Collection” and “The Wizard of Oz Collection”, as well as a number of portraits and collages of some of the 19th centuries’ most famous faces, including Albert Einstein, John Lennon and Princess Diana.

Leighton-Jones, although best known for his clowns and urchins, has completed many different series of works, in many different styles. His work, whether of clowns, children, social situations, pub scenes, or “the weighty ladies”, is recognizable from all others as a mixture of the classical and the modern. His realistic rendition of the human form, combined with an impressionistic background, creates a timeless and compelling image that speaks to children of all ages.

“Humor in art is a British tradition going back to Hogarth and Rowlandson, yet is rare today outside the world of political cartooning. For 50 years or so, I have used humor in many of my paintings and continue to do so. Much of the subject matter derives from childhood memories and early manhood experiences, i.e. the wedding breakfasts, the pubs and the weighty ladies. For the past 25 years I have lived and exhibited in the U.S.A. showing to a varied ethnic and cultural clientele. At first I wasn’t sure how the British sense of humor would be appreciated but my doubts were dissolved when these people began to buy the works. Men and women identified different characters in my pictures as people they knew as friends or relatives. On numerous occasions I was asked to dedicate the pieces personally to the buyer as he or she found a resemblance to a character. Most artists are pleased when their works are beautifully painted, I’m happy when a painting elicits a good laugh”. Barry Leighton-Jones. 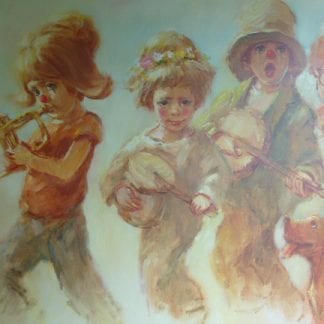