Lumen Martin Winter was born on December 12, 1908 in Ellery, Illinois. When he was three years old his family moved to Larned in western Kansas, to a ranch located along the Santa Fe Trail. The memory of the Santa Fe Trail influenced Winter’s western art throughout his life. Winter worked creating watercolors, oil, murals in marble and bronze, mosaics, block prints, stone lithography and etchings.

Winter studied at Grand Rapids Junior College in Michigan and the Cleveland School of Art in Ohio. He went on to study art at the National Academy of Design, Grand Central School of Art and Beaux-Arts Institute of Design, all in New York City. He also studied in France and Italy. Winter’s instructors included Ivan Olinsky, Eric Pape and Walter Biggs. He knew and was influenced by Thomas Hart Benton and John Stuart Curry. Became long-time friends with Norman Rockwell while working on murals at the United Nations in New York City.

Winter established studios in Sante Fe, New Mexico starting in 1939 however he worked all over the country. He served as an artist with the Signal Corps in the U.S. Air Force during World War II. From 1941-1944, Winter assisted Ezra Winter(no relation) with the Radio City Music Hall murals in New York City, and created murals at the Hutchinson, Kansas post office (Threshing in Kansas) and public schools in New York City.

Winter contributed mosaic murals and base-relief sculptures for the U.S. Air Force Academy chapel in Colorado Springs, Colorado; paintings and murals for the 1964 World’s Fair; the insignia and medallion for the Apollo XIII lunar mission; and a base-relief frieze for the Gerald R. Ford Health & Physical Education Center in Grand Rapids, Michigan (destroyed).

Some of Winter’s work can be and had been found in the Friars Club (destroyed 2011) in Cincinnati, Ohio, the Library of Congress, murals in AFL-CIO headquarters, Washington DC, and the National Wildlife Federation  headquarters (destroyed?), at the United Nations General Assembly in New York City. Other locations include the Church of St. Paul the Apostle, New York City, the Kansas State Capitol Rotunda, the Kansas Museum of History, a mural for the former Daytop Village building in New York City.

Winter’s 48-foot-tall bronze statue, the Rosary Madonna, was cast in Italy, blessed by Pope John XXIII at the Vatican, and now can be seen at the Marian Shrine in Stony Point, New York. Later in life, Winter created artwork for the City of New Rochelle, New York, including its public library and the Thornton-Donovan School.

The Harness Racing Museum & Hall of Fame is holding an exhibition, The Spirit of the Horse, from June 1, 2015 to May 31, 2016 showing the fine selected watercolors and drawings of the wild range horse that Winter created mostly in New Mexico.

Written and submitted by Alexander W. Katlan for the website of the artist 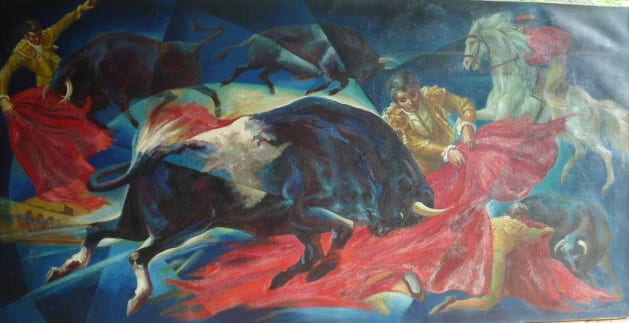