20″x 24″ by Lee (as identified in catalog but attributed to Beverly Edwards, 1935 – 2022. Beverley Edwards was a devoted teacher of drawing, painting and printmaking for over 45 years.  Born in Atlanta, Georgia, Beverley received her early art training at the High Museum of Art, Emory University and the University of Georgia.  After moving to Cape Cod in 1959, Beverley began to teach at the Institute of Contemporary Art in Boston as well as the Falmouth Artist Guild.  She served as Museum School Director at the Fuller Museum in Brockton from 1972-1984 and in 1985, founded the Monotype Guild of New England. Beverley  had over 35 solo exhibitions since 1966 throughout NYC, Cape Cod and New England and had been included in over 100 group shows across the country and the world.  Her numerous awards include “Best in Show” at the Cahoon Museum of American Art for her monotype “Black Lily” 1991.  Her work is in numerous museum, corporate and private collections including the Museum of Modern Art, New York; the Duxbury Art Complex Museum, the Christian Science Church of Boston and Tufts University, Boston.  This is a well executed charming painting which was very popular as prints  for children’s rooms. Look at the detail!  Buyer pays for shipping. 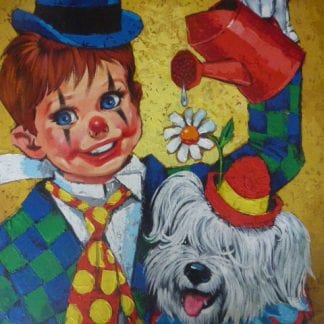