5″ x 7″  Doulton & Watts stoneware jar with a wonderful top.  Condition appears to be excellent. The mark reads Doulton & Watts, Registered, Lambeth Pottery with a number I believe is 1367 (or 1837).  Buyer pays for shipping.

John Doulton, born in London on 17th November 1793, was made an apprentice at the Fulham Pottery in 1805 and completed his apprenticeship in 1812. Doulton then found employment as a thrower at a small pottery in Vauxhall Walk, owned, following the death of her husband, by a Mrs Martha Jones.

The business, now known as Doulton & Watts, moved to Lambeth High Street in 1826 and continued to develop its main business of stoneware bottle manufacture.

At the end of 1853 John Watts retired, triggering the liquidation of his partnership with John Doulton. He was well rewarded, receiving his share of the partnership as an annuity of £150 per annum and interest at 5% on a sum of £5000. 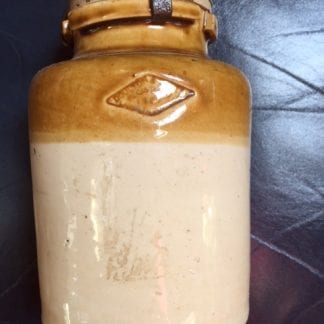