Note that although the picture implies that the finish on the bronze is polished, that is only from reflection. There is a lovely dark overall patina from having never been polished, only dusted.

He studied at the Accademia Albertina in Turin. One of his teachers was Odoardo Tabacchi. From 1885, Villanis lived in Paris and became one of the most productive sculptors towards the end of the 19th century. His female bronze busts, cast by the Society de Bronze de Paris, were exported all over the world from Paris, particularly to the United States. Today his sculptures can be found regularly in auctions.

The foundry mark says Garanti Au Titre which translates to “Guaranteed to the Title.”  It also says LV Deposee meaning “Trademarked.”  The number 807 is the lot number that was created.  This bronze bust of Iris is in original patina and condition. She is  24″ tall and 16″ wide at it’s widest point.  She is VERY heavy at 42 pounds and can be shipped at buyer’s expense or personally exchanged. 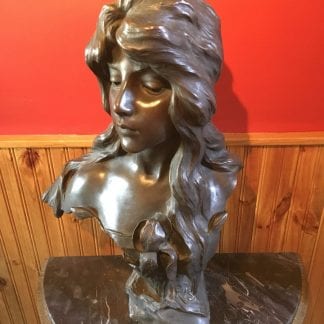