Watercolor of Chicago on artist board.

From the Internet: My grandfather painted about 3600 paintings, divided in two periods, before he moved to Zaltbommel and when he lived in Amsterdam, roughly before 1969. His paintings before 1969 on canvas are sold for several thousands dollars, the ones he painted especially for the American market for $500 and more. His views on Amsterdam are mostly from before 1969 and are mostly 80 by 100 cm. The smaller paintings are painted after 1969. Reinier Snapper died in 1989 and was buried in Zaltbommel in the Netherlands. He never lived in Switzerland, but stayed there a few months with his first wife, escaping from the Nazis, since she was Jewish, as was my grandmother, his second wife. She married him in 1948. Her name was Mary Goudvis and she sold most paintings to the American market, using the contacts of Mrs. Jeane Bosley from Brooklyn, NY. She sold all the American paintings on commission. Written by Roland Goudvis-Drijver 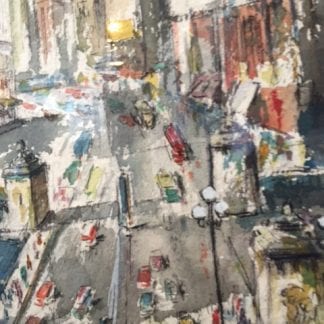