Probably Donald Bonnist purchased these directly from the artist in the 1950’s. Full sheet measures 12 3/8″ x 14 1/2″. The fine quality paper is NOT pink as it appears in some images. It is off white and the condition is clean.

Franz Herbelot (as copied from WikiAnswers, no guarantee of it’s authenticity but the most info available).

A street painter famous for Parisian scenes. Herbelot is possibly only a pseudonym. He (or possibly she) was active in Paris around the period from 1940 to 1960.

Herbelot first made rough on-site street sketches which were unsigned and bear only the location name. These sketches were later reproduced in his studio. It is the lithograph prints and the line drawings with watercolors added which bear his “Herbelot” identity and issued numbers.

There were two originals. The street sketch and subsequently the Lithograph master for reproduction with the added identity.

The original watercolor street sketches are the most inspiring as they have hidden depth that is lost when the sketches are finalized on Lithographic plates.

Lithograph reproduction was the intention, producing many copies of desirable scenes to sell to tourists. The lithograph process produced a finished article that was comparable to a watercolor original.

I believe that well framed good examples of prints especially 1/????? have a value of around 150 euros and reasonable examples around 50/60euros

If you are lucky enough to own an original street sketch in water colour then I imagine the value to a Herbelot collector would, if in very good condition have a value of around 1500/2000 euros.

Obviously it would require authentication from a renowned source, they are easy to distinguish in so for that the sketch appears unfinished when viewed alongside any litho or oleo print which appear with line outline to the subjects.

There are many copies with so called signatures.

Very few originals remain, they are always unsigned, with the location written with a forward slant in pencil, also they contain a little less finite content than the reproductions. 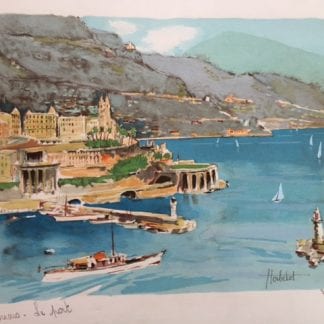