Free As The Wind, ORIGINAL by August Albo, DAC Collection

FREE AS THE WIND

Donald Art Company reproduced Free as the Wind on stretched canvas with the feel of brushstrokes so while many claim to have an original, please do not be fooled into paying an exorbitant amount for a reproduction of this work. It was by far the most popular copy distributed by DAC.

While there is no paint loss, there is one small spot in the sky that will require some stabilizing .  On a personal note, when Vivien was in her early teens and working at DAC doing collating, this painting arrived from the artist and her father asked “what shall we name it?”  Vivien said, “how about Free As the Wind!”   It is a hard painting to part with and is priced accordingly.

Shipping is at the expense of buyer.

On verso is handwritten:

Free As The Wind 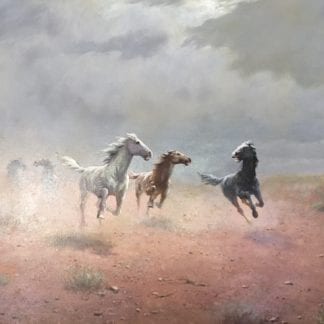 You're viewing: Free As The Wind, ORIGINAL by August Albo, DAC Collection$51,000.00
Add to cart