Image measures 12″ x 29″. Signed Cecile Johnson watercolor on heavy paper. There is a thin white boarder around the image to be covered by a mat.  Buyer pays for shipping.

A painter of sporting scenes, especially action figures such as skiers and swimmers, Cecile Johnson has done numerous watercolors reproduced in Skiing magazine and also of the winter Olympics.  She finds that painting competitive figures on site is similar to the excitement felt by the subjects she is depicting—there is only one chance to do it the way you want it done.

However, she does many other subjects besides sports including New England landscapes with wildlife, snowscenes, and views of the Caribbean, a place she especially loves.  She is widowed from Dr. Philip Johnson, a Lutheran bishop, and did much of her painting while traveling with him.

Cecile Johnson is from St. Paul, Minnesota.  She attended Augustana College in Rock Island, Illinois and did summer study at the Art Institute of Chicago.  Her husband was a pastor in a Chicago church, and she took magazine illustration jobs in that city.  Then when he became a national church figure, the couple moved to New York where her illustration and easel-painting market widened as well.  Clients included TWA, the Bank of Bermuda and Equitable, and dignitaries began purchasing her paintings such as Presidents Gerald Ford and Jimmie Carter, Emperor Akihito of Japan and King Carl XVI Gustav of Sweden.

In 1999, a retrospective of her painting was held at the National Art Museum of Sport.  It was titled Through the Snow and Under the Sun.

Johnson is on the board of the American Watercolor Society and the Board of Trustees of the National Art Museum of Sport. 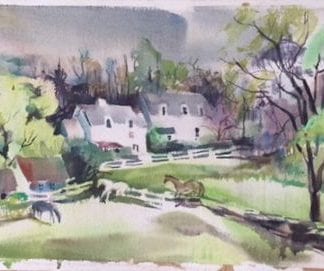