This charming gouache  is signed “Jandro,” the pseudonym for Alejandro Siches Piera. It is on heavy paper and in perfect condition.   It measures 9″ x 11″.

Alejander Siches Piera (1921 ~ 2009) was a Catalan painter with innate drawing ability. He learned from  J. Baixas, L. Muntane and R. Tarrega.  Many of his works were signed “Siches.”  He received several awards including the Sant Jordi prize and an honorable mention at the exhibition of sacred art in Rome. He exhibited for the first time at the Augusta Gallery in Barcelona followed by exhibits in  France, Italy, Germany, Great Britain and the United States.

This information was provided by Paola Paesani of Italy who has researched the artist. Thank you Paola we are grateful for your help. 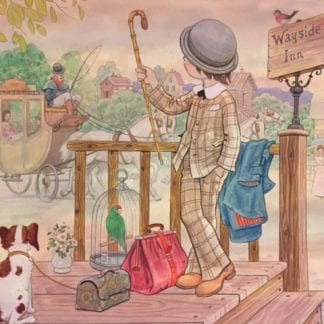