12″ x 15″  signed Jean Lareuse watercolor on heavy paper. Buyer pays for shipping.  THIS IS REALLY INTERESTING. WE HAVE TO PAINTINGS, BOTH ORIGINALS,  BUT SLIGHTLY DIFFERENT FROM EACH OTHER.   Look carefully to see the difference if you find the other which is slightly smaller.  Notice one has a polka dot dress and one doesn’t!

Born in French Guiana, Africa, of Catalan Parents in 1926, Lareuse has devoted most of his life to his art. He began painting at the age of thirteen., studying in the south of France, and then at the Ecole des Beaux Arts in Paris. His first one-man show, quite fittingly, was at the Galerie Ariel, Paris in 1948, and his second, also in Paris, at the Galerie Drouant-David in 1952.

He has taken part in many group shows, among them the Biennale de Menton and the salon d’Automne. His paintings have subsequently adorned galleries in London, Caracas, New York, Montreal, and Washington. Another honor was bestowed when in 1955, he was awarded the First Prize of the President of the French Republic.

That year marked yet another milestone in Lareuse’s life, for he went to New York, and there met his American wife. He Remained there for the next fifteen years, during which time had frequent exhibitions. The summer months were spent in the south of France where he still maintains a studio.

The Lareuses live in a delightful old house with a garden view of the Eiffel Tower in the Paris suburb of Suresnes. Although the summer months are still spent in Prats-de-Mollo, the major portion of Lareuse’s painting is now done in his Paris home, which also serves as a studio, and which is as bright and appealing as his work. His own art collection, scattered throughout the house, and hung on stark white walls, contains the works of Matisse, Picasso, Dufy, and, of course Lareuse.

His paintings hang in several museums such as the Museum of Modern Art in Paris and he is represented in over eight hundred private collections in the United States.

By his tactic use of primary colors, and simplicity of presentation, Lareuse has been able to portray his humor and sensitivity throughout the gamut of his works. In the Catalan village of Prats-de-Mollo, his summer studio home, he has embellished the chapel walls with six large murals depicting exquisite Madonnas, and with the same enthusiasm and alacrity, has achieved a superb balance between the aesthetic and mundane in his portrayal of nonsensical nuns, whose illogical behavior becomes instantly believable.

Lareuse’s affection for the horse and for racing, led him eventually to the excitement of racing at Auteuil, Saint-Cloud and Longchamp, where he quickly assessed and captured the action and color. It is but a short walk from his home to the racing scene at Longchamp, and it is here he delights in sketching. These Drawings, and the mental picture he derives are later enlarged and brought to life on canvas, with the gleam still intact.

The freshness and sparkle of the man can be seen in all of his work, whether it be oil or watercolor.

For Jean Lareuse, what has evolved since he first chose his life’s work at the innocent age of thirteen is the flirtation of the translucent quality of his art, with the bright imagination of his mind. The end result promises to be a marriage which will stretch into a timeless love affair. 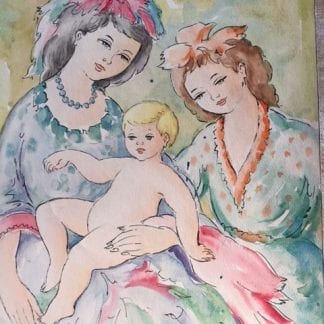