Sought after Karel Appel (famous artist) record & Litho/Screen Print combination from 1963 in good condition. It is the FIRST private pressing, published by The Worlds Window, Baarn (Holland) in 1963 which predates the 2nd pressing on the Philips label. The record doesn’t appear to have ever been played. The sleeve of the Litho says: “It is strictly forbidden to sell this litho separately from the album MUSIQUE BARBARE.”  The only noticeable “damage” is a slight crease on the lower left corner of the sleeve of the litho and less noticeably on the litho. Some weight applied may erase this which I’m applying, having just found these in our collection. The glossy front of the jacket appears to have some areas with a waxy texture which wipes off with my finger. I’m sure there is a name for it and I’m sure it can be corrected by someone with more finger tread! Were the color not black it probably wouldn’t be evident.

Karel Appel, (1921-2001), was born in Amsterdam. He studied at the Rijksakademie van Beeldende Kunsten from 1940 to 1943 and started exhibiting in 1946. He was influenced by Pablo Picasso, Henri Matisse and Jean Dubuffet; he joined the Nederlandse Experimentele Groep and joined CoBrA (European group allied with Abstract Expressionism) in 1948 together with Corneille, Constant and Jan Nieuwenhuys. Appel’s work is characterized by informal brush work, bright, bold color, and a slashing line. His paintings often possess a childlike quality. Examples of his work are in the Boymans-Van Beuningen Museum, Rotterdam. His 1949 fresco in the Amsterdam City Hall caused controversy and was covered up for ten years. In 1950 he moved to Paris and then developed his international reputation traveling to Mexico, the USA, Yugoslavia and Brazil. He is particularly noted for his mural work. He made his home in New York and Florence before passing away.

Album contains a 30 page book with over 30 (double-page) photographs in color and black/white. Photos are by Ed van der Elsken and text by Jan Vrijman is in English. 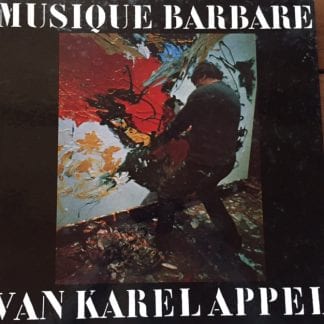