Antonin Marek Machourek (1913-1991). I believe this is a gouache/watercolor on heavy paper. It is signed. Also in blue paint he has written his name on verso. There are paint smudges around the edges on the back which add to it’s authenticity. Note other markings on the back. I’m not 100% sure what to call it but it is an original. The painting measures 19 1/2″ x 25 1/2″. Buyer pays for shipping.

Antonín M. Machourek was born in Moravie in 1913. He studied at the School of Decorative Arts and at the School of Fine Arts, both institutions in Prague. In 1939 he worked on one of the biggest mosaics in the same city. Six years later, in 1945, Machourek attended the Fine Arts School in Paris.

Later he settled in Monaco where his works were often shown. Machourek’s paintings and his designs in fresco and mosaics reflect his intensive temperament as a poetic artist.

In 1959, he obtained the 11th Grand Prix de Peinture taurin at the Salon International d’Art Plastique. 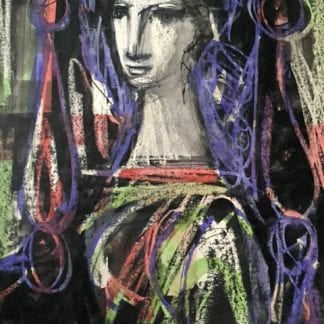