18″ x 21 1/2″ Original painting by Pierre Duteutre. The over all appearance of “crackle” is intentional by the artist. Buyer pays for shipping.

From 1934 to 1939, he worked for Paris Publishing Society (PES). From 1947, he worked for publications Marijac where he created  his series, Marijac scenarios, most famous Sitting Bull. This comic series included 277 plates, from 1948 to 1953 and it appeared in the journal Coq Hardi .   Duteurtre worked for Marijac until 1968 and shortly thereafter devoted himself full-time to painting.   His influences were the great French Impressionists including Renoir, Monet and Signac.

The above is a little hard to decipher as it was copied from another source which used a French to English translation. 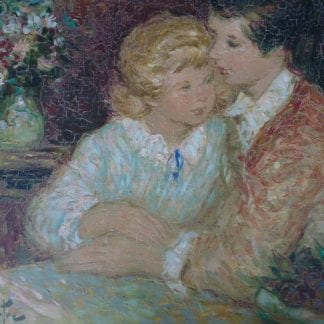 You're viewing: Mother and Daughter by Pierre Duteutre, DAC Collection $625.00
Add to cart