This special painting by Norman Yeckley is of a very desirable subject. It is 24″ x 36″ and painted on Masonite. Buyer pays for shipping.

A painter of desert landscapes who lived primarily in California, Norman Yeckley was born in Douglas, Arizona, and raised in Arizona and California.In 1928, he settled with his family in Glendale, California. After graduating from high school, he studied at the Otis Art Institute and the Art Students League of Los Angeles where he was a student of Dana Bartlett.

In the 1930s, he began painting desert landscapes and by the 1940s, had gallery representation in Phoenix, Los Angeles, and Palm Desert. The Donald Art Company of New York also reproduced a number of his oil paintings and sold them nationally. He remained a resident of Southern California and was active in the Glendale and Laguna Beach Art Association.

Norman Henry Yeckley (1914-1994)Born in Douglas, Arizona, in 1914 and subsequently raised in Southern California, Norman Yeckley’s lifelong fascination with the desert is reflected in his colorful plein-air paintings of his two home states.  Yeckley grew up in Glendale, California, where he worked as an engineer for the city.  He later took classes at the Otis Art Institute and the Art Students League, both in Los Angeles. At the latter, Yeckley was a student of Dana Bartlett, from whom he inherited a predilection for painting desert views in transparent jewel-like colors—a stylistic convention shared by many artists of the Southern California school of landscape painting in the first half of the twentieth century.

In the 1930s, Yeckley painted desert landscapes for the W.P.A. and gained such recognition that he was soon represented by galleries in Los Angeles, Palm Desert, and Phoenix.  He was a member of the Laguna Beach Arts Association and the Glendale Arts Association.  He remained in Southern California until his death in 1994. 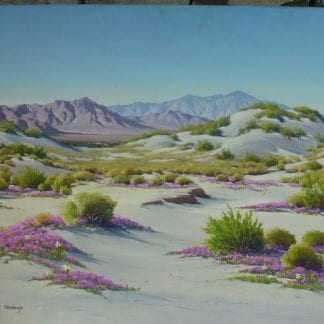