Original Barges on the Seine by Maurice Martin from DAC Collection

Maurice Martin was born in 1894 and died in 1978. A member of the Moret School of Painting at Moret sur Loing, not far from the Barbizon School in the Seine et Marne district of France. Martin became a specialist in the open air or “plain air” painting and the use of pure color.

The technique used by Martin demanded a free and spontaneous style of painting in order to catch the rapid changes in outdoor light. An artist of these schools he attempted to extract the colors and shapes as well as the fragrances of nature, putting the total ambiance and experience directly onto the canvas. As a general rule, artists from prior schools of classical training chose to absorb the experience of nature into mental and emotional images or perhaps even sketches and then return to the silent studio where they organized their thoughts and interpreted them onto canvas.

The primary motivation for Martin born out of the teachings of the Moret School was to go through the woods with his paints and canvasses capturing a piece of nature at an exact prescribed time, thus eliminating the intellectual character of landscape painting. He believed that a landscape should be viewed purely as a moment of beauty.

Among the fine landscape painters, Maurice Martin is one of the most renowned in the world. He was a member of the board and commission of examiners at the Salon des Artistes and also Vice President of the Society of French Landscape Painters. In addition, Martin became a member of the Board of Examiners at the School of Moret sur Loing, where Alfred Sisley, throughout his life had painted. There he had come to be affectionately called, one of the “Four Musketeers of Impressionism”, next to Monet, Renoir and Pissarro.

Martin was a tall man and in his words, “saw from high up”. Yet his paintings are always impeccable in their perception, well lit and full of grace. His many landscapes include studies of Picardy, the Isle of France, Brittany and Provence. He also painted in Spain, especially Grenada and Malaga, capturing with the tip of his brush the dances of sunlight he so much loved.

The Foundation Taylor, to which he belonged, has created a prize”Maurice Martin” which is awarded every year during the “Salon de Moret”. 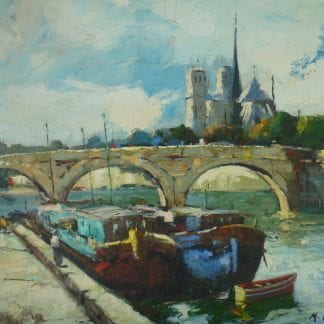 You're viewing: Original Barges on the Seine by Maurice Martin from DAC Collection $945.00
Add to cart