24″ x 48″ The canvas could use some stretching. One of my favorites! Could be the little dog in the street. Buyer pays for shipping.

Harold Stephenson was a California painter who was known for his formal portraits of Hollywood notables and as later as a painter of stylized scenes of children and post-Atomic ruins in the early 1960’s.

Stephenson was born in Bellefontaine, Ohio in 1907 and he left Ohio as a young man to study at the Art Student’s League and the National Academy of Design in New York and later at the Ecole des Beaux Arts in Paris.

After the War, Stephenson settled in Hollywood where he worked for the studios and painted portraits for the Hollywood elite. In the early 1960’s, he began painting a series of painting of waif-like children among fanciful ruins, reflecting his anxiety over nuclear war. These scenes of children were very successful and were published as popular prints. Stephenson was also active as a teacher, opening his Benedict Canyon Studio for students several days a week. In recent years his work has been re-discovered by young rock and roll musicians who are ardently collecting the art and furniture of the early 1960’s. 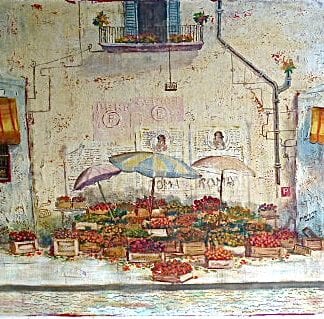