10 1/2″ x 14″ original oil by Achille Emile Othon Friesz. Titled The Butterfly Catcher,” this painting is on panel and signed lower left. Overall crazing of the paint but no paint loss. The period frame is in good condition. With frame it measures 18″ x 21″.  Buyer pays for shipping.

Achille-Emile-Othon Friesz, who later just called himself Othon Friesz, was born in Le Havre in 1879. Early on he was encouraged by his parents to become a painter and as soon as 1892 he began training at the Ecole des Beaux-Arts in Le Havre, where he worked at Charles-Marie L’huillier’s workshop. It was there that he met Raoul Dufy and George Braque, with whom he developed a lasting friendship. In 1897 Friesz was granted a scholarship and studied until 1903 under Leon Bonnat at the Ecole Nationale Superieure des Beaux-Arts in Paris. He met with Henri Charles Manguin, Albert Marquet, Henri Matisse and Charles Camoin. His contact with Camille Pissaro was a great infuence on him. Friesz made his debut in 1900 at the Salon of the Societe des Artistes francais. Over the years Friesz abandoned his former nature-oriented concept in favor of work formed by Fauvism. He traveled extensively exhibiting throughout Europe where his work became well-known. He also exhibited at the Armory Show in NY and in Chicago and taught between 1912 and 1921 at the Academie Moderne in Paris, from 1925 at the Academie Scandinave and from 1944 at the Academie de la Grande Chaumiere. An outstanding late work is the decoration he did with Raoul Dufy for the Palais de Chaillot on the occasion of the World Fai in Paris, 1937. Even though Friesz used a more traditional, austere technique in his late works, several of his earlier works, especially from 1907, are regarded as the boldest examples of Fauvism. 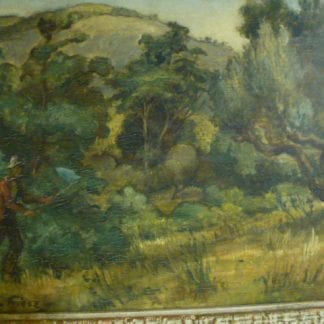