Otto Gustav Adolf Kriens (The Hague, November 20, 1873 – Voorburg, June 29, 1930) was a Dutch painter, draftsman and etcher from Rijswijk. Kriens was educated at the Academy of Fine Arts in The Hague and the Academy of Fine Arts in Brussels. He was a student of Eduard Willem Frederik Kerling. He lived and worked in Rijswijk from 1905 and was a member of the Haagse Kunstkring en Sint Lucas in Amsterdam. He worked in The Hague, Brussels and Rijswijk (also Overijssel, Zeeland, Flanders). Kriens painted landscapes, still lifes and figure pieces in a naturalistic-impressionistic style, but he also worked as a draftsman, etcher, set designer and wall painter. He has decorated interiors and painted whites for the RMS Titanic. He made paintings in churches and the royal train carriage. He was also involved in applied art. His paintings hang in the Rijswijk Museum or are privately owned.

Arie Zwart was one of his students.

Otto Kriens was married to Jeanette Guldemond in 1905 and had a daughter and a son. He was a member of the Beauty Committee in Rijswijk. Kriens died at the age of 56 in the Voorburg hospital after an operation for appendicitis or peritonitis. 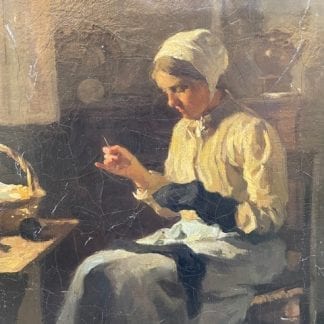