This original oil on canvas measures 22″ x 28″ and with the frame the total size is 24″ x 30″.  It has over all crackle as seen in the pictures but no paint loss. It is signed Bramanti ’48. It was purchased by Donald Bonnist directly from the artist,  as noted on the card on the reverse. Buyer pays for packing and shipping.

As a painter and creative influence in both fine art and American pop culture, Remo Bramanti’s career and life journey took two simultaneous paths to acclaim: he enjoyed a career as a painter with equal talents in abstract expressionism and realism, and in the commercial world he was a much sought after graphic artist, illustrator and designer.

His paintings in photo-realism display the technical skill Bramanti had in creating lifelike images of both the human form and landscapes, reflecting his rich Italian heritage, life in New York in the early to mid-20th century and his abundant travels.

While an active participant in the abstract expressionism movement as it evolved in the United States during the early 1950s, Bramanti simultaneously gained a reputation as a leading graphic artist and illustrator.

He was engaged to do portraits and album covers of such popular music icons as Bobby Darin, James Brown, Buddy Holly, Chuck Berry and Jacques Brel. His private portrait commissions include film director Woody Allen. He also did the cover art for the book from the musical of the 1960s pop culture phenomenon hair and served as the artistic designer for America.

He also did the cover art for the book from the musical of the 6o’s pop culture phenomenon Hair and served as the artistic designer for many well know publications on far reaching topics.

In 1987, the American Lung Association invited Bramanti to create its annual Breath for Life designs and he was also the artist invited to create the National Christmas seal in the mid 1980’s. Artistic Luminaries such as Norman Rockwell and Rockwell Kent have also designed the United States Christmas Seals and Bramanti is the only artist invited to have this honor for three consecutive years.

Works of his are in the collection of The Museo Italo Americano was the first museum in the United States devoted exclusively to Italian and Italian-American art and culture. Established in 1978, the Museo Italo Americano is a non-profit institution governed by a Board of Directors. In 2004 the museum held an extensive retrospective of the artist, painting and works on paper.

Bramanli died in in 1998 Largo, Florida 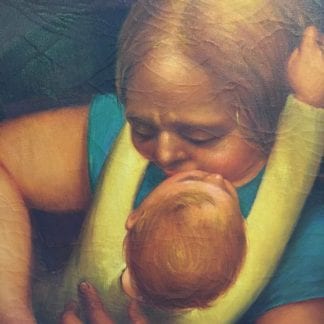