This painting measures 30″ x 40″. The condition is fine and the skill of the artist shines through. We think that Tomaso painted himself in the male roles in his paintings. Shipping is at the expense of the buyer.

Living from 1898-1985, Rico Tomaso was a highly regarded illustrator and painter. He was known for his illustration of mystery novels and exotic adventure stories and also for his teaching abilities.  Many of his illustrations were for The Saturday Evening Post, including the Albert Richard Wetjen stories about the Mounted Police of South Australia.  Another client was the Granger Pipe Tobacco company, for whom he did full portrait illustrations. Tomaso was one of the most prolific artists reproduced  by the Donald Art Company. He painting such a variety of subjects that often the only proof of artist is a simple “RT” on verso. 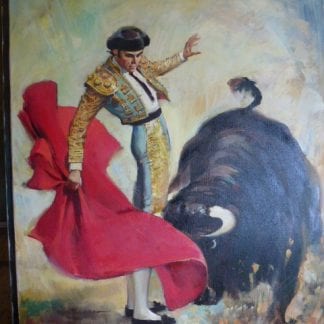