7″ x 9 1/2″ watercolor/gouache on artist board was probably done in the 1930’s. This is a charming painting; however, there is a lot of “foxing” most clearly seen on the white border. With a mat covering the border, the painting would be acceptable for framing without restoration. Any foxing directly on the painting itself is hardly noticeable if at all. Buyer pays for shipping.

She married on December 9, 1937 to Judah Harrison and then went to the then Dutch East Indies where she became a widow two years later.

No information was found on her education. It is known that she designed illustrations for publishers Noordhoff , HJ Paris, Mulder & Co., Valkhoff & Co., Joachim Stable and FG Kroonder. She also worked as a book cover designer .

A separate booklet, Dutch Kleederdrachten and ancient poems (nd), she made for the fashion house Maison de Bonneterie , with 25 full-page illustrations. 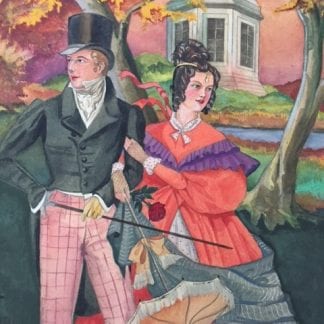