20″ x 32″, buyer pays for shipping. This is a delicate floral study done by a master.

Terry Kearfott LaBonne, the artist’s granddaughter, has provided the following biography.Robert Ryland Kearfott was an American portrait painter. He was born December 12, 1890 in Martinsville, Virginia. His parents were Pierceall Kearfott (1856-1920), a pharmacist and banker and Rebecca Kratz Kearfott (1856-1928). He preferred to work from life, but was successful painting from photographs when the subject was unavailable for sittings or deceased. Besides oils Kearfott worked in watercolors and charcoal. He was also a sculptor and illustrator. In 1948 he edited KEARFOTT, KEARFOTT and Allied Families in America. Robert Kearfott attended public schools in Martinsville Virginia, attended Richmond College, and graduated from the University of Virginia in 1911. After graduation he studied art under George Bridgeman, the celebrated teacher of drawing at the Art Student’s League of New York. Later he studied painting under Charles Hawthorne. While living in Europe, Kearfott began his portrait study under Castelucho, the Spanish portrait painter, and later with Richard Miller in Paris. Robert Kearfott was an artist member of the Salmagundi Club and associated with Portraits, Inc.Robert Kearfott was on the art staff of the “New York Evening Journal” from 1912 to 1914 and worked as a freelance advertising artist from 1914 to 1916. He was a member of the art staff of H.K. McCann Advertising Co. in San Francisco from 1916 to 1922 where he produced illustrations and covers for national magazines. Kearfott studied in Paris France from 1922 to 1925. While in France Kearfott spent a year painting in Brittany in the village of Pont Aven. He even lived in the very farmhouse where Gauguin lived and painted. A view of this is seen in the painting entitled “Farmyard Lezaven.” He returned to the United States in 1926 and made his home and studio in Mamaroneck, NY, a suburb of New York City. He died in October of 1969 and is buried in Martinsville, Virginia.EXHIBITIONS:

Various other showings have been held in New York, Connecticut, Virginia, North Carolina and Texas throughout Kearfott’s career 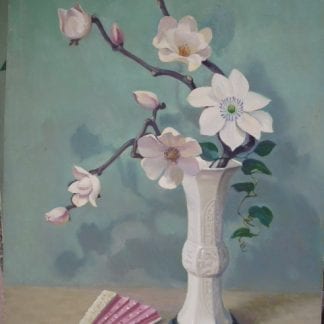