Eitel was born in Paris in 1926. He studies at the Ecole des Beaux-Arts in Paris. Eitel started to exhibit in major group shows in 1946. In 1957 he was awarded the Grand Prix de Montmartre. The French government bought his works as did the City of Paris and the Museum of the Navy.  He exhibited regularly at all major Salons of Paris including the Salon de la Jeune Peinture (where he was elected a member of the Directing Committee and the Jury). He also exhibited at the Salon d’Aujourd’ hui. He participated in many group shows in France such as the Ecole de Paris at the Galerie Charpentier, at the Societe des Amateurs D’Arts, the Peinture Francaise in Vichy, the Bordeaux, and abroad in America, Sweden, Germany, England, Switzerland and Belgium. In 1957 he had a one-man show at the Galerie Raffy, Paris and in 1959 and 1962 he exhibited at the Galerie Framond in Paris and Piccadilly Gallery in London.

He also goes by the name Jacques Eitelwein. His work is  in the following museums: Musee de la Marine, Musee Etat Francais in Paris, Musee de St. Cyprien, Musee Chapelle Saint Colomban.  He passed away in 2006. 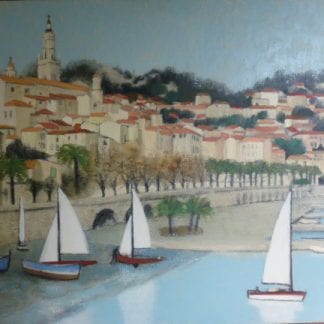