73″ x 94″ abstract by Serine Bonnist, wife of Donald Bonnist. This important painting, executed in 1965, is seen on the cover of the Donald Art Company catalogs. It also held a prominent spot in the lobby of the company at Donald Art Plaza in Rye Brook, NY and later in the lobby of Art Resources International, Norwalk, CT, the company of Randy, Robin and Brett Bonnist.

It will be mailed as a rolled canvas. Buyer pays for shipping.

Serine Van Embden Bonnist was born in the Netherlands. She started painting at a young age in Amsterdam at the Academy and at the Nieuwe Kunstschool.  She continued her studies in Paris at the Academie de la Grande Chaumiere and as a full time student of the Beaux Arts.  After Serine and Donald moved to America, Serine continued her studies in NYC with Tschacbasov at the Art Students League. She painted with Kantor, Vytlacil; studied graphics with Sternberg and sculpture with Crefeld and Helen Belling. She pulled her limited edition litho prints at Atelier “Mourlot.” Several of her paintings were reproduced  by DAC. She is in numerous collections having sold a three part standing screen to the American film producer, Darryl F. Zanuck.

In the words of Serine, “Although every artist has a personal way of expression, I feel that originality has always been a reflection of the total mind of the artist. Intellect can be a heavy burden when it suppresses creativity, but a vast reserve of knowledge, when submerged in the unconscious can evolve into exuberance and excitement far beyond reality and technicality.” 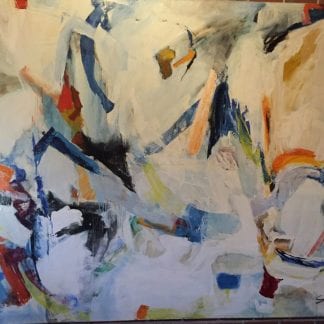