Edgar A. Stareck was born in Benton, Kansas and studied at the University of Kansas at Lawrence. He exhibited at the Kansas Free Fair in 1939 and the Midwestern Artists Exhibition in 1940. Having achieved some level of success in his native Kansas, he relocated to New York City in the mid 1940’s. He studied at the Art Students League in 1948. He traveled in North Africa and Italy, making sketches and watercolors.

He was essentially a Greenwich Village artist. His themes vary between Mid-Century Modern with City Scapes, Abstracts and Animals. 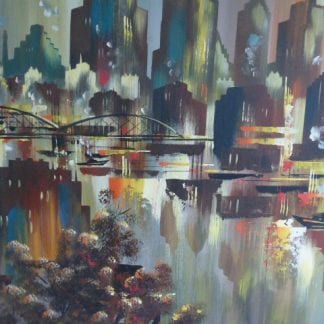