This original oil by Bernard Lorjou is on burlap canvas and measures 35″ wide by 46″ tall.  It is in good condition with no evident damage.  Buyer pays for packing and shipping.

Lorjou was born in Blois, in the Loire et Cher department of France. Born to an impoverished family just before World War I, Lorjou was to receive the bulk of his education, as he put it, “in the streets.” At the age of 13, with his desire to learn to paint, he left his home for Paris.  Lorjou lived through early years of hardship and often found himself sleeping in metro and train stations while working without pay as an errand boy for a printing house. He eventually found a position as a silk designer where he met his future wife Yvonne Mottet, also an artist and painter. Lorjou was successful as a silk designer. Over the next 30 years his designs  were worn by many of the world’s most prominent women. This gave him an income that allow him to paint on a full-time basis.

In 1928 Lorjou exhibited at the Salon des Indépendents. During his travels through Spain in 1931, he is stricken by the expressive strong styles of the artists El Greco, Velasquez, and most of all Goya. Inspired by Goya, Lorjou began painting socio-political events. In 1948 he shared the Critic’s Award with Bernard Buffet. In the same year, Lorjou formed the art group “l’Homme Temoin” with art critic Jean Bouret by declaring that “man is an eater of red meat, fried potatoes, fruit and cheese”.  The group banded together in an effort to defend figurative painting against the abstract movement and eventually attracted other painters such as Bernard Buffet, Jean Couty, André Minaux, Charazac, and Simone Dat.

Over the next 30 years Lorjou’s reputation as a painter became more established. His work and style went through a series of transformations, the only constants being the power of his images and the rich precision of his use of vibrant color.  Lorjou was supported by prominent art figures like Georges Wildenstein and Domenica Walter, the widow of Paul Guillaume. He became known for his extravagant exhibits and combative spirit. His paintings are exhibited widely throughout the world, namely in France, the United States, and in Japan. 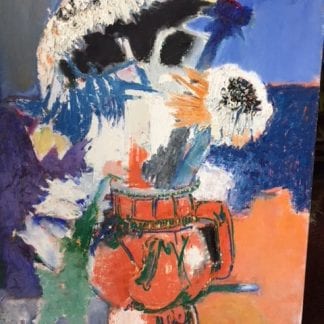