The Traveller’s Companion Series #50, by D.A.F. De Sade, 120 Days of Sodom or the School of Libertinage

3 volumes of  The Traveller’s Companion Series #50, published in 1957 by Olympia Press (France). Condition is remarkable good. No foxing and as seen, only slight yellowing on the spine from sun. What appears as toning on the back page is a shadow. Paperback. The following info is copied from Wikipedia (under the category of “you can’t make this stuff up!”).

The novel was never completed; its first chapter was written according to Sade’s written plan, but the subsequent chapters are in the form of rough drafts and notes, often consisting of graphic descriptions of the novel’s scenes. Sade wrote it in secrecy while imprisoned in the Bastille in 1785; shortly after he was transferred elsewhere the Bastille was attacked by revolutionaries, leading him to believe the work was destroyed, but unbeknownst to him it was instead recovered and preserved by a mysterious figure and subsequently handed over to a multitude of people, culminating in its publication in 1904.[2] It was not until the latter half of the 20th century that it became more widely available in countries such as the United Kingdom, the United States and France.[3] Since then, it has been translated into many languages, including English, Japanese, Spanish, Russian, and German. It remains a highly controversial book, having been banned by multiple governments such as in the UK in the 1950s,[6] but remains of significant interest to students, historians and literary critics.[2] In 2016, a contemporary English translation of the novel was published as a Penguin Classic.[6] 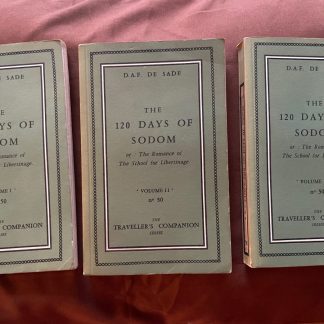