Miss Humel and The Lady Bertha Hastings. 8 3/4″ x 11 1/2″.  From a book. Gold edged on one side. Condition is very good. No foxing. Small water mark on lower right corner of one. A few isolated spots which do not take away from the image at all. Thick paper.

John Hayter (1800–1895) was an English portrait painter. He was the second son of the miniaturist Charles Hayter and brother of Sir George Hayter, also a portraitist. He entered the Royal Academy schools in 1815, and began to exhibit at the Royal Academy in the same year. He also exhibited work at the British Institution and the Royal Society of British Artists. Hayter established himself during the 1820s, with portraits of notable figures such as the Duke of Wellington and the opera singer, Giuditta Pasta. His portrait drawings, in chalks or crayons, became particularly popular, a number of them being engraved for The Court Album, Portraits of the female aristocracy (1850–57).

William Henry Mote (1803–1871) was an English stipple and line engraver, primarily known for his portraits. He produced etchings for reference books, as well as original etchings. Mote became a member of the Royal Academy in his twenties[1] and his portraits hang in the National Portrait Gallery, London. The National Portrait Gallery (London) contains sixty five portrait engravings from Mote. New technology introduced in 1820 allowed more books to be produced. Publication of annuals with etchings of beautiful women was a fad that lasted from 1823 to 1857, and Mote was a prolific engraver of this content. In the 1830s the etchings became popular as watercolor projects, and many people turned etchings into wall art.

London Published by David Bogue Fleet Street. 1807/8 – 1856) Publishing started in Fleet Street around 1500 when William Caxton‘s apprentice, Wynkyn de Worde, set up a printing shop near Shoe Lane, while at around the same time Richard Pynson set up as publisher and printer next to St Dunstan’s Church. More printers and publishers followed, mainly supplying the legal trade in the four Inns of Court around the area,[23] but also publishing books and plays. 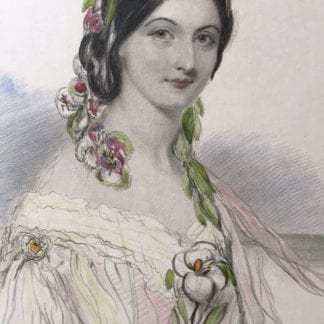