Peter Hayward studied at Middleburg College graduating in 1923.  He was a member of the Salmagundi Club, the Honolulu Art Association, Windward Artists Guild, the Lahaina Art Association and the AAPL.  He exhibited in New York in the 1950s winning the Grand Prize All Media at the Washington Square Outdoor Art Show.

His artistic career was divided between Hawaii, the East Coast, and the many places of the world he visited.   He had 14 one-man shows in New York, 5 in Honolulu, and several in Palm Beach, San Francisco, Miami and Boston.  Hayward has been described to be like a poet creating magic from ordinary prose; he gives us not just Hawaii but the magic of the island of love.

Hayward preferred oils and bronzes and taught both sculpture and oil painting. 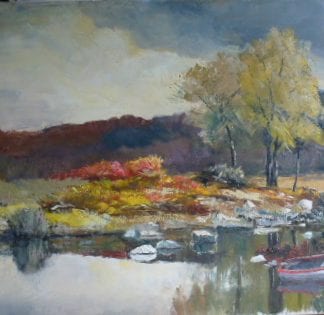