Erik Gornik was an Austrian born artist, photographer and outdoorsman whose work was widely exhibited in the United States, Europe, Africa, South America and the Virgin Islands.His first exhibition was at the Van Lier Art Gallery in Austria 1932. Gornik studied painting in Vienna, Copenhagen, Paris, and at the Royal Academy in Amsterdam. Honored at the Royal Show of Paintings in Oslo, he exhibited in Belgium, Holland, Germany, Denmark, Sweden, and Norway. Gornik was a contributor to various American outdoor magazines and held one-man exhibitions in New York, Phoenix, Detroit and other American cities.Widely traveled, this artist gained recognition in Africa as a naturalistic painter of outdoor subjects. He explored the Patagonian Andes in South America where he built the famed sportsman’s paradise called the Five Lakes Hotel. He also enjoyed an exciting career in public relations and motion pictures base on sports fishing.He used his memories of many parts of the world to transfer the Argentine Alps, New Jersey Woodlands, New England Autumns and the Canadian Rockies into satisfying subjects.

Erik Gornik taught art classes at his studio home in St. Thomas, Virgin Islands until he died suddenly of a heart attack in December 1970 at about the age of 60. His paintings are in many European & American museums and private collections. 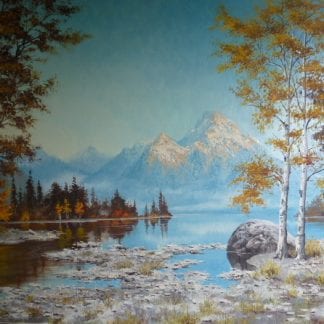