12″ x 16″ full sheet of heavy paper. Bright iridescent colors on what we believe is a Chromolitho (not sure). Copyright DAC in 1941, number 86. Buyer pays for shipping.

Willy Schermele began her career in the twenties as an actress, but without much success. From the wings of the Flora Theatre in New Amstelstraat she made her first caricatures of revue stars.

Then she developed in The Telegraph and other newspapers as fashion editor and cartoonist, a new genre at that time. She wrote and illustrated children’s books. Her breakthrough came with the book, The Adventures of mice Bacon Snoetje in 1940. During the war she illustrated Hansel and Gretel, Tom Thumb, Goldilocks and the Three Bears, Enid Blyton’s Good Morning Book and she illustrated and authored the Winkie weries.

Schermele’s foreign adventure to the UK came to a premature end in 1957, according to correspondence with publishers, when her husband, (author of boy’s books), Henri Language, became terminally ill.

They returned in the Netherlands, where she starts designing greeting cards for some major UK publishers in order to survive. 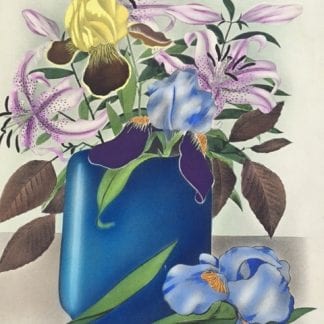